After you have started the app, you can start solving puzzles by tapping on the PUZZLES button. The first puzzle will load automatically, as shown in figure 1*. The goal in each puzzle is to find a checkmate in the least amount of moves possible. The number of moves you are allowed to make is shown on the board, along with the side you are playing. For example, ‘white to move, mate in 2’ means you are playing the white pieces, and you have to find a forced checkmate in two moves. 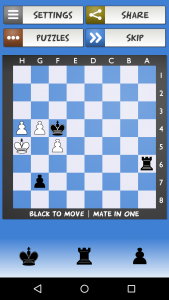 * Note that, as shown in figure 1, the app will automatically rotate the board when you are playing the black pieces. If you do not like this, you can turn this feature off, as described in the third part of this tutorial.

There are three ways in which you can select your move: drag move, tap move, and button move. Note that button move is not available on tablets, because it is designed for smaller screens. In the following text, we will assume that you are trying to move the rook in the diagram of figure 1 from A6 to H6.

You can also tap the squares in reverse order. However, if you tap on a square, and there is only a single move possible from or to that square, the app will immediately perform that move. For example, if you click on the H6 square in the diagram in figure 1, the app will move the rook from A6 to H6 because it is the only black piece that can move to H6. If there was a black pawn on C5 in the diagram, you could tap on that pawn to move it to C4, because that would be the only square the pawn was allowed to move to.

On smaller screens, it can be difficult to accurately select a square in the diagram. In this case, you can use the buttons along the bottom of the screen to select your move. In the ‘rook from A6 to H6 example’, you would first tap on the rook button, and then on the H6 button. Note that you might need more taps in more complicated examples.

Once you have made a move, one of the following things will happen:

* Note that you can turn off the result dialog; in this case, the app will load the next puzzle immediately.

** If you would like to see why your move was wrong, you can turn on refutations (as described in the third part of this tutorial). In this case, the app will play an opponent’s move that proves that your move does not lead to a forced checkmate in the maximum number of moves. 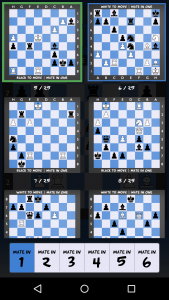 Your rating is your score in the app. Once you solve a puzzle, your rating changes based on a number of factors:

Your rating can only decrease if you make mistakes. If you make no mistakes, and you find a solution you had not found before, your rating always increases. You gain more rating points by solving more difficult puzzles.

You can view your current rating by tapping on the PROGRESS button in the start screen of the app. An example of the dialog that will appear is shown in figure 3. You can close this dialog by tapping the screen anywhere on the dark background.

Figure 3: An example of the progress dialog.

The button at the bottom of the screen allows you to sign in to Google Play Games. Once you sign in, you will see two additional buttons. Tapping on the LEADERBOARDS button will allow you to compare your rating to those of your friends, and to see where you stand on the global rating list. Tapping on the ACHIEVEMENTS button will show you the achievements you have unlocked. The achievements available are shown in the following list. 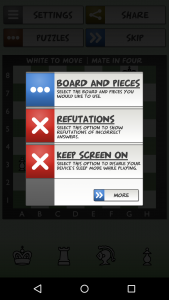 Figure 4: The first page of the settings dialog.

Select this option to enter a screen where you can choose the board and pieces you would like to use. You can swipe left or right to navigate the sets available.

This option affects what happens when you make a wrong move. If refutations are turned off, the app will simply return the pieces to the original position. If you turn refutations on, the app will play a response instead, and the border of the board will turn red. Note that the app does not attempt to make the best move; instead, it will play a move that is good enough to prevent a checkmate in the maximum number of moves allowed.

Turning this option on will prevent your device’s screen from turning off while you are thinking about a puzzle. Note that keeping your screen on for long periods will drain your device’s battery.

You can turn the sound effects in the puzzle screen on or off using this setting.

Once you have solved a puzzle, there are two things that can happen. If you turn RESULT DIALOG off, the app will instantly go to the next puzzle, allowing you to go through the puzzles without interruption. If you turn it on, you will see a dialog instead. The dialog will show the change to your rating, and will notify you if the puzzle has alternative solutions available.

Some of the puzzles in the app have multiple solutions. If you turn this setting on, the app will not continue to the next puzzle until you have found all solutions.

Whether or not you like the app, you would help us a lot by sharing your opinion. We strive to keep improving the app, and your input is very valuable. Select this option to go to the Play Store, where you can rate and review the app.